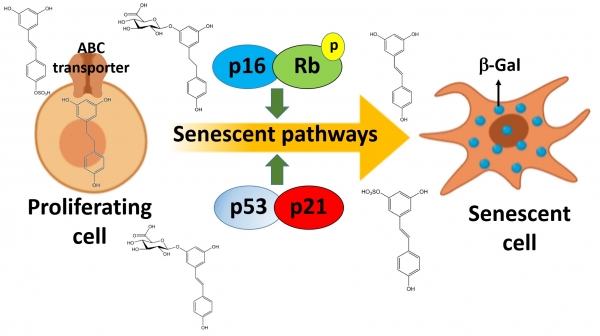 Every year, about 1.5 million new breast cancer (BC) cases are diagnosed in women worldwide. This high incidence has aroused the interest of the scientific community, placing BC in the spotlight. The prevention or treatment of this chronic disease through diet is one of the most explored strategies hitherto. Resveratrol (RSV) is one of the most investigated phenolic compounds in the last decades.

The massive output of favorable preclinical results obtained with RSV has led some authors to define this molecule as “a promising molecule for fighting cancer”. However, RSV reaches near to absent concentrations in malignant tumors in BC patients (Ávila-Gálvez et al. 2019, Mol. Nutr. Food Res. 63(9):e1801239), what makes difficult to rationalize its therapeutic effects against BC. An attractive hypothesis is to invoke conjugated metabolites of RSV (main molecules detected in normal and malignant human breast tissues) as the mediators of its beneficial effects. However, the actual evidence indicates that these conjugated metabolites lack effect in short-term antiproliferative or estrogenic/antiestrogenic activities. This investigation provides answers to the fundamental question: “Are the conjugated metabolites the molecules responsible for the biological effects associated with RSV consumption?”. This study was carefully designed considering the bioavailability of the RSV metabolites (the concentrations of metabolites and the cell model to mimic a plausible in vivo context). Besides, to overcome the lack effect reported for these compounds, we used long-term assays (i.e., senescence and clonogenic assays) as an alternative to the short-term assays. Our results showed that RSV and its metabolites (dihydro-RSV, dihydro-RSV 3-O-glucuronide, RSV 3-O-glucuronide, RSV 3-O-sulphate, and RSV 4´-O-sulphate), at physiological doses, require ABC transporters to enter MCF-7 cells (wild-type p53), where through the modulation of the p53/p21Cip1/Waf1 and p16INK4a/Rb pathways (depending on the metabolite) may induce senescence, what in turn reduce their clonogenic capacity and promote cell cycle arrest. This study highlights the role of physiologically relevant RSV metabolites as molecules able to exert long-term tumor-senescent chemoprevention against BC cells. From an in vivo point of view, the effects and the underlying molecular mechanisms described will be relevant in the design of future clinical trials, which could be a step forward to reduce the in vitro/in vivo gap.