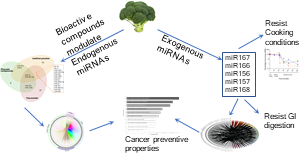 As we know, healthy dietary habits reduce the risk of developing chronic diseases (e.g., heart disease, stroke and diabetes). A large number of studies support the preventive role of certain fruits and vegetables containing a variety of bioactive compounds in the development of these diseases. Recent findings provide evidence of how bioactive compounds (such as vitamins, lipids, miRNAs or other metabolites) present in the diet may exert their biological activity affecting consumer gene expression patterns.

In this scenario, researchers from the Madrid Institute for Advanced Studies (IMDEA) performed computational analysis to explore the processes and pathways associated with genes targeted either by (1) host-expressed miRNAs (endogenous) modulated by the bioactive compounds in broccoli or (2) by miRNAs derived from broccoli (exogenous) through a cross-kingdom regulation. In addition, the stability of exogenous miRNAs from broccoli was assessed after several food-processing methods and in vitro gastrointestinal digestion. Researchers concluded that the anticarcinogenic and cancer-preventive properties attributed to cruciferous vegetables might be mediated, at least in part, through miRNA-related mechanisms.