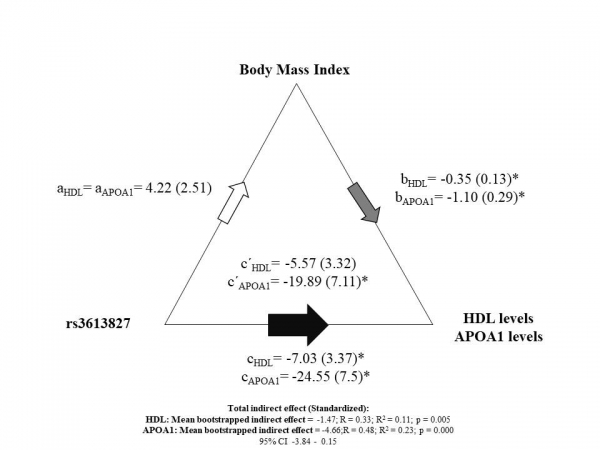 APOA2 is part of the apolipoprotein superfamily that includes the apolipoprotein A1 and is the second most common apolipoprotein on the human HDL.  It has been considered of minor physiological importance in lipoprotein metabolism, recent studies in rodent models have shown that APOA2 plays multiple roles in the maintenance of HDL, obesity, and obesity-related insulin resistance.

Although in humans, the function of APOA2 still remains controversial. In this study, the authors hypothesized that the genotype risk of APOA2 rs3813627 single nucleotide polymorphism could be associated with anthropometrical variables, glucose metabolism, and lipid traits. They compared the non-obese with overweight/obese individuals according to their genotype on the anthropometrical variables, glucose, and lipid metabolism. They also studied the mediator effect of BMI on HDL and APOA1 levels. The authors found that the APOA2 rs3813627 SNP is associated with low HDL and APOA1 levels susceptibility, and this effect was mediated by an increased BMI. however, future studies are needed to confirm these observations in larger cohorts.