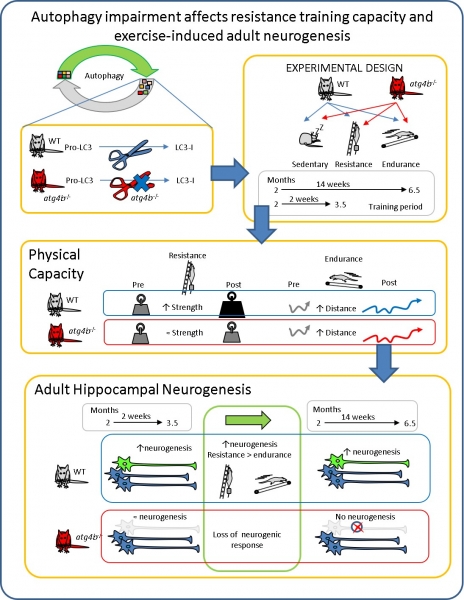 Researchers from University of Oviedo have recently published a study where the importance of autophagy, a crucial process for cellular proteaostasis maintenance which decrease with age, is analyzed within the context of resistance or endurance training adaptations.

Previous works have described the effects of the lack of autophagy for endurance exercise adaptations (aerobic exercise, such as running) in several mouse models, with different results depending on at which point this pathway was affected. However, since the different types of exercise (resistance vs. endurance) follow different molecular routes, these researchers decided to evaluate whether autophagy was also important for resistance training adaptations.

Thus, they took advantage of a mouse model with a systemic autophagy partial reduction. In this model, the authors observed that these mice presented a lower resistance capacity, but not in endurance capacity, regarding control mice, before the beginning of the study. After this first evaluation, some of the mice performed a resistance training (climbing with different loads on a ladder), others developed an endurance training (using a treadmill) and others remained as a sedentary group. Training period had two different lengths, two or fourteen weeks.

At the end of the intervention, the authors observed that resistance trained autophagy deficient mice were not able to gain strength after both training periods, which indicates that resistance capacity was in fact affected in these mice. However, resistance training prevented the strength loss observed in those autophagy deficient mice that belong to the sedentary groups. On the contrary, resistance capacity of the deficient mice was the same as the observed in the control mice. Interestingly, the researchers observed that, in the case of sedentary control mice from the fourteen-week intervention showed a strength loss at the end of the study. Thus, this result suggests that resistance training can be highly recommended for those situations where a loss of strength is present, such as aging-associated sarcopenia, where there is a diminution of skeletal mass.

Moreover, the authors also explored what happens in the brain after these trainings, mainly at the neurogenic level, the formation of newborn neurons, within the hippocampus, a region implicated in memory formation. In this case, both resistance and endurance trainings increased the formation of new neurons in the hippocampal region of control mice, although this result was not observed in autophagy deficient mice. It is worth noting that one of the main findings of this study is that, in control mice from the fourteen-week intervention, resistance training had a higher capacity to maintain neurogenesis levels regarding endurance training. This result is very interesting since, as seen regarding the loss of strength during aging, resistance exercise will be also very effective to maintain cognitive reserve at this stage of life.